Tales of the Cocktail Bookstore (in the Monteleone Hotel)

It’s not too late to give the gift of literate drinking. The Tipplers will be signing copies of The French Quarter Drinking Companion at the following venues before Christmas:

What critics are saying about The French Quarter Drinking Companion:

“…what a fun little travelogue, with witty, detailed descriptions of visits to dozens of watering holes…I went through the whole book looking just at ‘Tattoo themes’ …”
Judy Walker, NOLA.com/ The Times-Picayune

One of the great things about food festivals is the opportunity to taste dishes from a variety of chefs. Unfortunately when tucking into a plate at an outdoor event, you miss out on all the other pleasures of dining in a restaurant: the music, the lighting, the flowers, the linen, the china and crystal. You also miss the conviviality of sharing food across a table with friends and family. A chef’s repertoire is also limited at outdoor events, narrowing a guest’s opportunity to experience the full spectrum of a restaurant’s menu.

Enter the Bon Appetit Grub Crawl. Conceived along the lines of a pub crawl, where participants move from one location to another, the Grub Crawl allows guests to sample a restaurant’s signature dishes in their original setting. Originally launched in Brooklyn, with plans to expand to L.A. and other cities, New Orleans played host to the second incarnation last weekend, rolling through the Central Business District Friday night, the French Quarter Saturday, and Uptown on Sunday.

I was lucky to attend one leg of that savory journey in my favorite neighborhood: The French Quarter. Along the way, participants cooled off with some delicious Belvedere Vodka cocktails. (Belevedere reps gave us several recipes for tasty drinks. Stay tuned for those.)

The Saturday Bon Appetit Grub Crawl snaked through the French Quarter beginning at Domenica, the John Besh restaurant located in the Roosevelt Hotel. We were greeted by Chef Alon Shaya who offered us a stunning array of house-made charcuterie, relishes, pate, cheeses, and a refreshingly bubbly Lambrusco. I quickly appreciated an additional benefit of the Grub Crawl format: face time with each restaurant’s chef, when Chef Alon told us how the prosciutto was made from locally raised hogs and cured in-house.

Wanting to save room for the next stops, I initially shared a plate with my friend and guest Monique Leon. But as we tore through the three-year aged prosciutto and Taleggio, it quickly became apparent that neither of us was in a sharing mood. Of particular note was the pate, so delicious that we contemplated stealing the jar to nosh on at home, but decided transportation would be messy. So we had seconds. And thirds. No kidding. And then came the artisan pizzas and at that point we were just eating on principal because it was all so delicious.

Though our bellies were full, we rallied and headed over to the Napoleon House to sample its signature muffaletta and Pimm’s Cup. We were served by third-generation owner Sal Impastato who regaled us with stories of his family restaurant’s. From there we walked a few blocks to Sylvain. It was a nice contrast to leave the Napoleon House — operated by the Impastato family since 1914 — for Sylvain, which has been open less than a year.

The French Quarter is usually viewed as the most traditional neighborhood in New Orleans, but there is plenty of room to start something new here, as we learned when owner Sean McCusker recounted his professional arc from New York writer to New Orleans restaurateur. We savored a tasty portion of crispy pork shoulder served with tangy greens and creamy Coosa Valley grits. Chef Alex Harrell not only told us how he made his dishes, but also where to get his grits (sourced from near his home in central Alabama). But my favorite bite at Sylvain was of perfectly pickled okra. Unlike its soggier, commercially-made cousins, this okra remained crisp, and though pleasantly sour, it wasn’t aggressively pickled. All I could think about was how delicious it would be in a gin martini. But we had more drinking and eating to. Onward!

END_OF_DOCUMENT_TOKEN_TO_BE_REPLACED

I think women should surround themselves with older women to use as role models for all aspects of our lives.

Seeing strong women achieve great professional  acclaim reminds one that you, too, can launch that business and succeed. Seeing women age gracefully and still look their age (Helen Mirren, Sophia Loren) reminds one that being beautiful need not be an idea abandoned in one’s twenties. And so it is with drinking. I have learned from several older women, my mother for example, how to approach drinking with a joie de vivre often at odds with America’s preoccupation with drink’s immoral and physical consequences. But sometimes one’s mother is not enough.

Class Magazine recently profiled the drinking habits of one of England’s most beloved (though recently departed) royal. (The bit about the hat box is fantastic.) She is, indeed, a model of drinking for all. 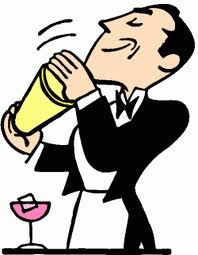 The folks over at Gizmodo conduct boozy experiments each Friday in their Happy Hour corner. Recently they explored the scientific difference between stirring and shaking a cocktail. While you may be able to guess which will yield a more watered-down drink, I still think you will be surprised at the how different a drink the two techniques can yield. And when it comes to drinking, as Rosalind Russel in Auntie Mame might assert, “Knowledge is power.”

Several posts back, Allison wrote about the joys of vintage barware on Etsy. I was drawn in particular to the Travel Bar that she linked to and though it fell squarely in the category of “Things I Don’t Really Need,” I bought it anyway. Owning the bar has conjured up memories of my Dad and his drinking habits, which I wrote about in my column,Neat with a Twist. I hope you enjoy.

Purchase a copy of The French Quarter Drinking Companion at...

The League of Spirited Tipplers
Blog at WordPress.com.